I have to say, it looks suspiciously like — a brand new airplane engine!!!

Admittedly, there’s not much building going on here, but there are some cool details to look at. The engine comes with its Engine Control Unit (ECU) – the computerized module that monitors and manages the engine performance. There’s a fusebox and dual voltage regulator module. And, there’s a completely assembled fuel pumps module. Early Sling 2 kits apparently required building up the internal plumbing with two 2 pumps, check-valves, hoses and clamps. I’ve been spared all of that. Each modules are matched to the engine serial number and were presumably used to test run the new engine (for about an hour) at the BRP Rotax engine factory in Austria.

There are some small parts for specialized electrical connectors that I’ll send off to my wiring harness builder for incorporation. There are also some bushings and hardware for mounting the Whirlwind propeller, which should arrive in a few days.

I can see the end of the airframe assembly down the road and setting the wheels in motion to have the engine group arriving in 3 months or so, will keep me motivated to accomplish tasks in order to be ready when it all gets here. 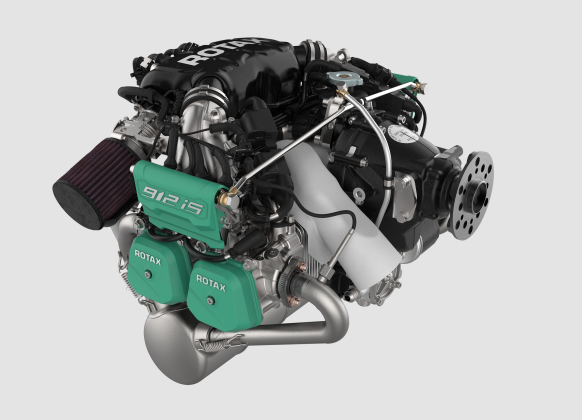 Yes, there is a 115 horsepower turbo engine option – which offers more performance to be sure, but it’s significantly more money, it’s got a turbocharger to maintain, not quite as high-tech – doesn’t have FADEC (computerized engine management system), plus – it demands a constant-speed propeller that costs 4 or 5 times as much as the fixed-pitch unit I’ve decided on for my machine.

Speaking of propellers – the propeller of choice for the 912iS powered Sling 2 happens to be the very sharp-looking, carbon fiber, 70 inch diameter, 3-bladed, ground-adjustable Whirlwind GA-RW3B, dressed with the perfect spinner.

The engine comes from BRP Rotax in Austria, through their South African distributor – Sling Aircraft and then to the USA. Eventually, it all has to make its way to the Upper Left Corner, where I am, in out-of-the-way Sequim, Washington. It’s a roundabout, slow-boat process – no doubt about it.

Because the engine and aircraft are of African decent – I’m expecting the engine fittings are going to be metric, as opposed to UNF – more typical for aircraft in the US. The engine itself is metric, but I understand that they can be had with UNF fittings for oil and fuel lines. However, the firewall forward kit is going to be for a metric engine and I’m not going to try to swim upstream. Go with the flow. Someday, if it really bugs me I could probably convert it from metric fittings. In the meantime, I’m going to put it all together and go flying – as it comes.

It’s pretty darned exciting and really something to look forward to.